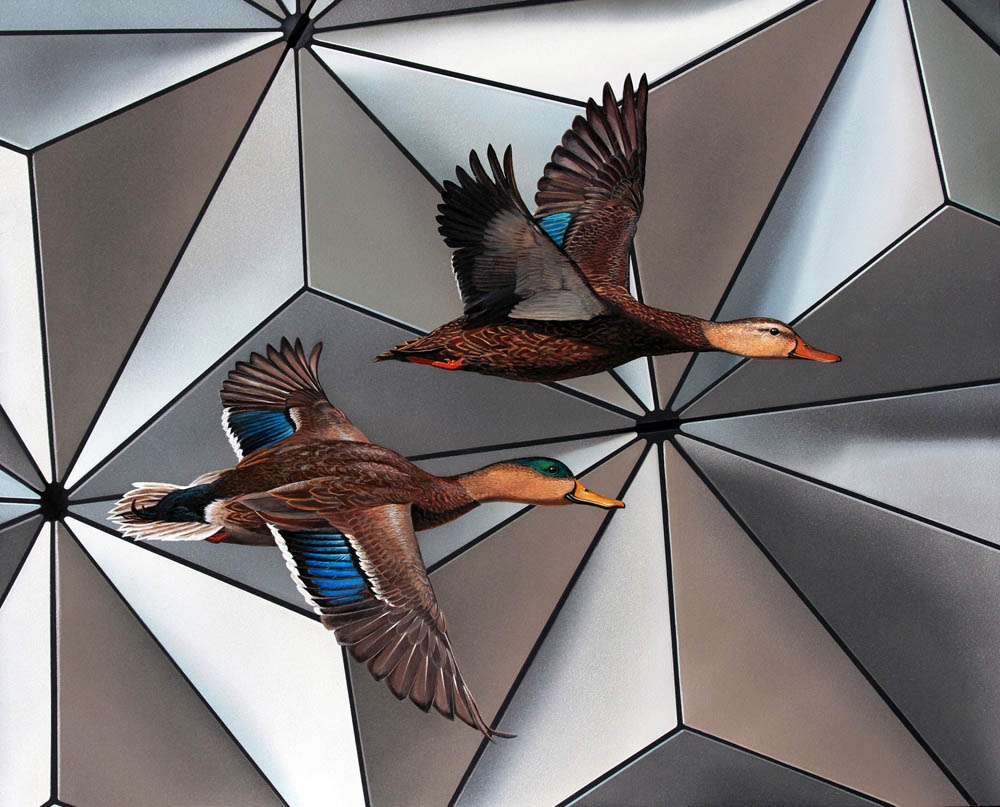 “X-OUT” depicts a pair of waterfowl flying by Space Ship Earth, an attraction at Disney’s Epcot®. It captures a moment in time as a hen Florida mottled duck and a hybrid mallard/mottled duck are paired up in flight. This situation is bad news for Florida’s local population of native mottled ducks because the hybrid is the result of a crossbreeding with feral mallards. Feral mallards are wild birds that were originally purchased as pets or by businesses years ago, before there were laws in place for protection purposes. The problem is these birds have become more numerous and do not migrate and are interbreeding with indigenous mottled ducks during the spring and summer months.

Unfortunately, the end result is that the local population of mottled ducks, are already in the process of losing the genetic make-up that is specific to the species. According to a statement from the Florida Wildlife Commission, “The long-term well-being of Florida mottled ducks is threatened by crossbreeding with feral, domesticated mallards… Because of the relatively small size of the mottled duck breeding population (estimated at 30,000 to 40,000), the complete hybridization could result in the extinction of the mottled duck in Florida. History has proved that the concern over the loss of the Florida mottled duck to hybridization is a real one and should not be taken lightly.”

As a native Floridian who loves nature and is passionate about protecting wildlife I have been deeply concerned for many years. So much so, that my primary inspiration in creating this painting was to raise awareness about the importance of protecting this species and its unique genetic makeup.

The painting “X-OUT” is much more than an acrylic painting of two flying ducks, it is my documentation of a bad situation and an artistic statement of how the continued loss of the Florida mottled duck’s genetic makeup is leading to its extinction through hybridization.